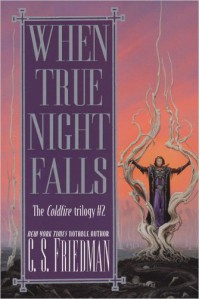 I don't have any issues with plus-sized people; several of my friends including people I've dated have been plus-sized and they are all compelling and adorable. same goes for plus-sized books. I like something sturdy to put my arms around, I love getting lost in them, and they are also often compelling although maybe not "adorable" per se. but with this book I've realized that I have a serious issue with a lithe and svelte novel of ideas that for some reason has decided to put on an enormous fatsuit and pretend that it is a big fat adventure and that it has always been this way. it's an insult to genuine plus-sized books!

there is much to applaud in the book. vampire-sorcerer Tarrant remains an entirely intriguing creation. the various fae forces remain fascinating. there is a new city explored in some depth and that is well-done too. and the continual discussion of faith and God and religion is an absorbing topic to me and Friedman brings both emotion and intellect to the table whenever the topic is on hand - which is a lot of the time. best of all are those creepy "children" who capture and torment our band of adventurers mid-way through the book.

but sweet Jesus this book is about 5 times as big as it should be! there is a tiny cast of characters engaged in an a pretty straightforward quest (on a less than straightforward world); the novel would have been so much more powerful if the narrative wasn't wrapped in so many layers of flab. this could have been an eerie and disturbing adventure set in a frightening dreamscape while exploring the power of faith. I would have loved that! instead I got fascinating ideas lost in a big fat fatsuit.

the most egregious contributor to all of the bloat is the constant, constant, CONSTANT moaning & mewling of this warrior-priest Vryce over poor sadistic vampire Tarrant. not a page passes without Vryce obsessing over him in every which way. what Tarrant could be thinking, where Tarrant is now, what that expression on Tarrant's face means, why his clothes are always so clean, how Vryce is so very put out by him and how it is such a challenge to be around him and how he puts his morals to the test and so on and so forth, ad nauseum. was Friedman cognizant of how extremely gay she was making this relationship out to be? I think not. at one point I literally couldn't believe my eyes as I read how Vryce was worried about what Tarrant would think about his unclean body and unkempt clothes. dude come out of the fookin closet already! and stop being such a bitch - you know you love that uptight vampire. old school closet types just really drive me up the wall.
Tweet
974 BOOKS